Yes, I am still alive….and it’s not even that I wouldn’t have anything to write about but somehow the words never quite make it into a post. However, I wanted to share this weekly astrology update from Pam Younghans with you. It felt so ‘right on’ when mentioning the scorpio’s energies, its symbolism and especially the phoenix part. That’s exactly what I’m currently going through (and, what a surprise, I happen to be a scorpio :-)). Perhaps more of you can relate – even if you aren’t born under this sign. We’re all in scorpio’s energies this week.

On 11/11 I had a powerful meditation session about a phoenix, being the phoenix. It is time to rise from the ashes – not just for me!

Your guide to planetary energies for

SCORPIO is the only sign of the zodiac that has multiple animal symbols — the Scorpion, the Eagle, and the Phoenix. Each one represents a different facet of the Scorpio experience. Together, they provide guidance that is much needed when we must deal with life-changing events, such as those that have occurred since the Scorpio New Moon last Wednesday.

Two of these animals — the Scorpion and the Eagle — symbolize two very different ways of responding to our life experience.

THE SCORPION hides under rocks or in loose soil during the day, coming forth at night to hunt and feed. They have the ability to paralyze and poison their prey. When we emulate the Scorpion…CONTINUE READING HERE

“A triangle with wings: The capacity for self-transcending.”

“The Total Lunar Eclipse on Sunday occurs at 7:50pm PDT. The Sabian symbol for the Moon’s location at the time of an eclipse gives insights into the higher intention of the lunation. The symbol for this Sunday’s eclipse reinforces Pluto’s themes of moving us into “a higher level of expression”….. that’s what stuck out the most for me from this report. But read it yourself, perhaps you find something useful for your path. And remember: tomorrow is EQUINOX (at 1:22 am PDT) – thanks to the two eclipses, this one may be pretty intense as well –

Your guide to planetary energies for

“A TEST OF FAITH.” These are the words that astrologer Bil Tierney uses to describe the effects of Saturn in Sagittarius. Given that Saturn fully entered the ninth sign last Thursday, each of us is now working with that basic lesson in varying degrees.

We will have something of a “pop quiz” this coming Friday when Saturn forms a square with Mars in Virgo. This aspect will challenge us to see …CONTINUE READING HERE

It’s that time of the week again. Here is Kaypacha’s pele report for you. Are you facing that “looming shadow” yet? Going into the underworld doesn’t necessarily sound like fun but do we have a choice? As always he is making it sound like it is manageable – with a bit of humor. Remember: anything is possible 🙂

Black Moon Lilith conjunct the north node of the Moon at the same time as retrograde Venus stations to go direct conjunct Mars.  Both of these are highlighting this week as Relationship Renewal Week!  A wonderful time to revisit the past, make amends, digest unconscious Soul intentions, heal and move on lighter, freer, and smiling!

That third quarter square Moon in Gemini also helps bring in more conscious perspectives that we may witness ourselves “from afar” and receive intuitive flashes of understanding.  The creative impulses of Leo can inspire NEW expressions of love, poetry, and romance as we lighten up and PLAY!  Gone is the heaviness, the remorse, the fears generated from past hurts…. we are ready to go for it again, dance, party, love, and rejoice.

That I may never know,

Why we hurt each other,

Or which one of us needs to grow.

Black Moon Lilith conjunct the north node of the Moon exact Friday but we have been feeling it a couple weeks and will feel it a couple more.  However, it could well culminate around Sunday as Venus stations and goes direct as both of these signal a death/resurrection process of renewal that may be somewhat unavoidable.

It is an excellent time to go into, sit with, feel, and heal past relationship woes, hurts, and failures.  It is a time when memories can get triggered, feelings re-emerge, and judgments of ourselves and others come to meet us.  It is such an opportunity, if we can actually let them come up, not ignore and stuff them back down (where they create dis-ease) and step from judgment to a state of vulnerable inquiry for Spirit to work magic within our hearts, bodies, and souls.

Check out my webpage and/or facebook page for a look at the bigger picture…. coming soon. Wishing you all the best in removing those blocks to future happiness!  Injoy!

This would be MY version of “how to connect to Spirit Guides”. When I was first introduced to the “idea” that there are Spirit Guides it raised my curiosity. I wanted to get in touch with them and the simplest and at that time probably easiest way for me to connect with them was via a pendulum. I tried it but have to admit that it only worked for a short time – and never worked that well for me as you REALLY have to be very focused to ask your question, come up with VERY precise questions etc etc. Not my path.

So I tried out a technique that I started calling “staring at the wall”. I set aside some time almost every day and simply sat there – like many do in their meditation, only I had my eyes open, staring at a white wall. I was hoping to receive information that way. Well, to be honest, I started seeing darker spots on the wall, here and there, then sometimes they seemed to move around, another time certain parts of the wallpaper seemed more pronounced or come into focus more than others. Then again, I would “see” something in the patterns of the wallpaper just like you might look at clouds and see a horse or a teapot in the cloud formation, that sort of thing. Whatever “vision” I was hoping for … it didn’t happen. I then played a little with colors: stared at a red blanket or a blue towel or whatever I could find in some intense color and drape it over two chairs and then start staring at the white wall. As you may have guessed: I then saw the complementary color. Don’t ask me why – just did that. Now, years later, I can only guess I was guided to do those things to train my eyes in some way.

Months passed, no vision. Nonetheless I kept my ritual of staring and started feeling tingling and tickling around my head and face more and more. It felt like someone was moving energy very gently around my head. 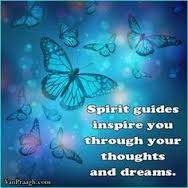 It wasn’t until 3 years later that something changed. In the meantime I had met my (now) husband and we were doing “sessions” together. I started listening to music that I had selected for the “wallstaring” as it seemed conducive for this kind of work. It wasn’t music from one of those meditation CDs you can find anywhere, I would actually call it atypical for this purpose…but it was important that it worked for me….and it did. The more I used it, the easier it was to get into that altered state that I now achieved quite easily when staring at the wall. Still no visions though. However, I started perceiving with my inner eye. Now, years later, I cannot recall the first times it happened but it felt like we were doing something like a guided meditation although my husband only guided me into the “spot” and then I would tell him what I perceived. This is a technique that we continued for quite some time. It could best be described as a Shaman’s Journey.

That was the same year I was told by a very dear, closely guided friend that I needed to try out Journaling. She told me that it was the way her Sacred Community started working with her. So from then on I sat in the same spot, same times as before but instead of staring I would have an open journal in front of me and wait for “thoughts” that would come in. I wrote them down, no matter how strange or nonsensical they were…..and most of them made no sense at all to me. Looking back now, it seems like we were just trying to establish our communication patterns here. I am still amazed at how hard it must be for our Spirit Guides to get their messages through…but they do…eventually.

It took another 2-3 years for communication to get clearer. I do get messages now that make sense and are made up of meaningful sentences. It doesn’t mean I never doubt what I get or that I do not use discernment anymore – as there may be other metaphysicals who try to disrupt, interfere, play games or whatever else….but communication works A WHOLE LOT BETTER now than it did in the early years.

The steps that seemed important in accomplishing this (aside from what you may have read in the other two posts) were:

1) Discipline and dedication. Setting a daily routine – same place and time – when I try to contact my Spirit Guides is helpful. If I can’t do it every day then I will pick days that work: Monday, Wednesday and the weekend, every other day …or whatever works for you

2) Be as neutral as possible: going into a communication with lots of thoughts or stirred-up emotions will potentially cause problems. Instead, you will want to be in a somewhat neutral state of mind

3) Use some kind of a “protection-mantra” that will banish any and all negative energies, entities etc, trying to ensure a protected communication channel free of any interferences

There are probably many more little tricks that I cannot come up with right now, but I will add them in the future. If you plan to get in touch with your Spirit Guides, you can get started with the above and see what happens. Have a journal with you and see what comes through. If you are more of an artist, perhaps you feel compelled to draw, for others the communication may be movements. My Guides have shown me certain movements of hands or body in sessions – some were like Mudras, the ones using my whole body ended up being a dance, creating a certain flow of energy that was important for me at that time (or so was told later). Be open and see what happens…and most of all: have FUN